Within a business’ tech aspect, networking is more than just the backbone of all communications taking place internally as well as externally. This communication happens between devices, peers and even individuals, such that it needs to be kept smooth and free of turbulence. However, with the increase in the number of endpoints, your network expands and suddenly your manual endpoint system solutions are no longer sufficient. KACE SMA allows for the implementation of a comprehensive, unified endpoint management strategy which extends security to all your endpoints and automates key functions so that your network of endpoint functions efficiently and effectively without you doing anything about it.

The newest version of KACE Systems Management Appliance has been upgraded in terms of look, feel and functionality. The input of the customers was taken into consideration along with the efforts of the KACE team to develop and roll out this update. The new version features a lot of new updates but the biggest one yet is the revamped user interface which is intuitive, comprehensive as well as aesthetic. Users are given the option to pick between either a light or a dark theme which drastically changes the luminosity of the interface. Other features include:

In this update, Automated Service Desk has been enabled which allow automatic creation of Service Desk tickets upon certain alerts. Expanding on this new scheme, Users can approve or reject these tickets through email which shortens the entire process thereby saving users time from having to revisit the SMA interface from their HUB to manage these tickets.

With the incorporation of the very effective Software License Harvest Assistant, you will now be able to quickly and easily detect the seldom used software and take actions to remove them which will remove efficiency. You can even customize your software catalog and organize it according to your need and restricting licensed software in License Compliance which includes the likes of Spotify, Solitaire, .NET and other applications.

With added support for Raspberry Pi and Raspbian Linux Agent, you can now perform actions like any another Linux distribution such as inventory, scripts, managed installations as well as several other actions. You can use a designated computer in a remote subnet to start custom machine actions via the new Agent Relay Tunnel.

Two-factor authentication has been enabled with this update and it gives you a greater degree of security as well as extending system user management. The common calendar allows you to get a global view of events which will assist you in the timely deployment and management of installs, patching jobs, script execution and performing updates as well as other tasks like OVAL.

In conclusion, this is a very user-friendly and user-oriented update which has improved the Systems Management Appliance in terms of both visuals as well as functionality and more users will appreciate the new features as well as the improvements made on the old ones. 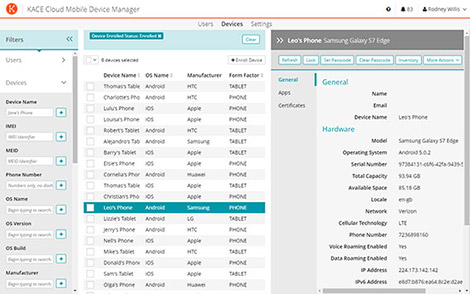 How to recover from a data disaster.
How to secure your data in the cloud
How to Isolate VMs from one another.